WHERE HAVE ALL THE DAYS GONE?!

It feels like I blinked and woke up on the near side of the end of March. We are barrelling towards the end of the month people!! First quarter of the year…almost in the bag.

March feels like the year is fully awake. January was stretching itself out from pie overdose and indulgent dessert coma, February was making its to do list and attempting to get its act together. March is, “go”. The transition between “is winter over yet?” and “are we now in spring”? For those in the Northern Hemisphere (North America, Europe, Asia, part of Africa), it is the official beginning of spring, and for those more south of the Equator, the beginning of autumn.

Go hard or go home. That’s my motto this last week counting down to the end of March.

Here in Texas, it’s all sunny with the occasional “cool” dip. Although to hear a Texan describe it, you’d think we were at risk of an ice freeze. Texas is….different. It is getting increasingly warmer. In contrast, to the North-eastern parts of the US. I have colleagues in New Jersey who as of Friday were digging themselves out of snow. Yeah, March is cray cray like that.  Speaking of that….

March is named after “Mars”, the Roman God of War. If you didn’t already know. I’m not exactly sure why I have/had March on my mind. But I like to go with the flow of the random thoughts that pop into my head….stay with me.

Sooooooooo. I found out that almost all major military operations ie “wars”, mostly US-NATO led ones, since Vietnam, begun in March! Coincidence or what?

I was in downtown Dallas on Saturday 24th and saw some of the “March for our lives” protests going on. Hmm….?

March for our lives, March 24

Beware the Ides of March! This is hands down my most memorable March “event”. I’ve just always just loved the way it….sounds. A statement made famous by William Shakespeare’s “Julius Caesar”, for its most infamous incident – the day in 44 BC (many million years ago), when Julius Caesar, leader/dictator (toh-may-toe/toh-mah-to) of the Roman Republic was assassinated. He was stabbed 23 times by his political rivals, after being stabbed in the back (forgive the pun) by his friend Brutus. The ides of March in itself was just the way Romans referred to the middle day of the month, also notable for as the deadline for settling debts. Tax returns anyone?

Of course, after the assassination, war ensued. March is a rather high tension month isn’t it?

Then there’s “March madness”! In the United States of America. Men’s college (university) basketball tournament. Throughout March, 68 teams compete in 7 rounds for the national championship. The penultimate round is known as “the Final Four”, when only, yes, four teams are the last ones standing and battle it out for the win. There’s brackets, bets and general madness. It’s not my sport. Final four parties are all the rage in March. That I can do.

March for me kicks off official half marathon running season! And now it is becoming a ritual to knock out two races in the month. There was a time, well 3 years ago, I would have considered that thought MADNESS.

Half marathon 1, the Trinity River Levee run, March 3rd. It was going to be beautiful. The trails around the Trinity river. The week of the race, the rains came down angrily. The levee was flooded and the organisers made the executive decision to change the course – 4 loops of the 5k route. In so doing, the race was downgraded from 21km/13.1 miles to 20k. Over one bridge and around another, over and over….and over. Loops are every runner’s nightmare. Or let me just speak for myself, a NIGHTMARE on steroids. Races are hard and I need all the distraction and encouragement a scenic route provides. After one lap, my mind goes into free fall …I HAVE TO DO THAT HOW MANY MORE TIMES??!! It really is a test of will.

To make matters worse (yes, WORSE), my new Bluetooth headphones couldn’t connected to my phone, so I couldn’t get to my playlist and audio book. My half marathon staples. No, no, NO. I was on the verge of freaking out. My running buddy Duyen, turned to me, “don’t worry about it Titi”. Bless her, in her attempt to bring me back to the present. If I didn’t bite her head off it was because I was choking on my laboured breathing. For near 2 and a half hours, it was just me and my thoughts. Ah!!! Now I know how this whole March thing popped into my head!

A fog covered Reunion Tower smiling over runners….as they take a bridge, March 24

This year was the THIRD year in a row that I’ve done this race! Oh my goshes!!!! My very own trifecta race. It was a special medal Monday feeling.

My 3 tips to get over the madness…

I can typically apply my strategies for fitness in any area of my life! 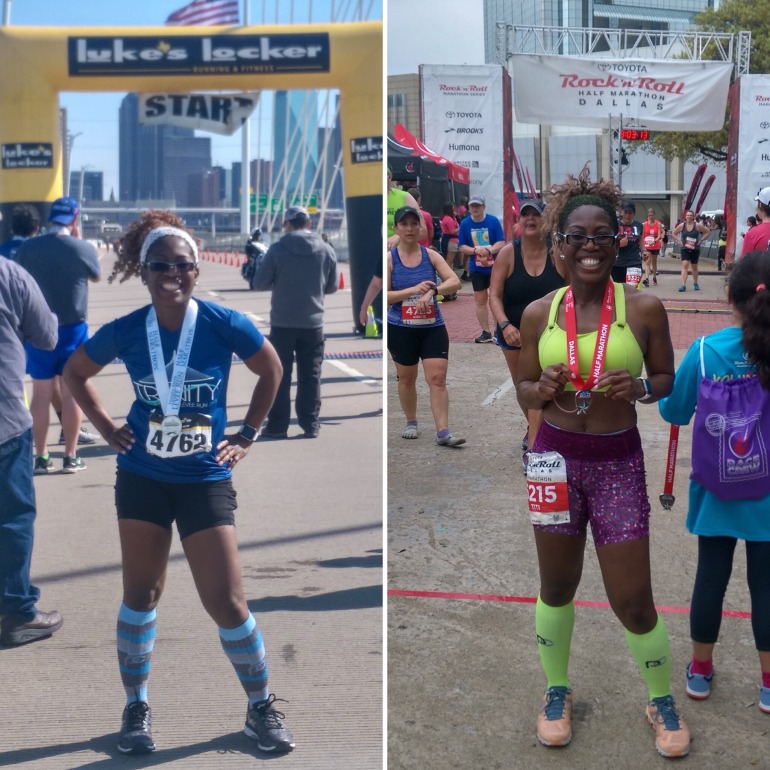 I’m fully awake. I’m better prepared. I’m marching on. I’m also at the tail end of a 60 day transformation challenge. Read my earlier post on why I love challenges and why you need one in your life – Can you do the challenge? I dare you!