Last Tuesday started out like every other Tuesday. I mean it’s the day after Monday, it bears the burden of hope for the week. Monday gets a pass for just being Monday, Wednesday has a hump, Thursday is the new Friday, Friday is Friyayy…….

As I was saying Tuesday 22nd started off quite unremarkably……then how did I end up with FOOD POISONING??!! Indeed it was a mystery. My eating habits can be quite eccentric and it doesn’t leave room for error……

On this day, like every day, upon waking, I had apple cider and lemon juice in warm water, followed by breakfast. I have the SAME breakfast. Every. Single. Day. Except for Sunday brunch (and I kid you not, if I go to any of my two top spots, I will order the SAME thing). Breakfast is ¼ cup cooked oatmeal (in water), ¼ crushed walnuts, 1 scoop unflavoured egg white protein powder, a generous shake of cinnamon and 1 banana or small apple, whichever is the flavour of the week.

I went about work, working from home as I do. Then it was time for lunch. I had leftovers from Monday, a sauté of diced onions, garlic, okra, papaya and broccoli with habanero peppers to kick the African taste buds. Yum. Adorned by beet greens and a piece of baked chicken. More yum.

I had another piece of chicken a few hours later. Then decided I’d go for a run to beat the impending grey clouds that were threatening to shed their contents. I had a 40min window! I was SUPER PLEASED when I made it out and back home in under that time?!!

I went back to work, had a salad for dinner (my usual combo of course), a friend stopped by needing some help, I continued reading my January book club pick “Becoming” by Michelle Obama, then it was time for bed, midnight ish. Like I said, Tuesday was unremarkable.

Until about 1.30am when I was woken by a slight tummy rumble. My first thought was maybe I was …..hungry? I’m not a go-to- bed hungry type but I couldn’t think of any reason. I got up and had some water telling myself “it’ll be a few hours till breakfast Titi, hang in there”!

A few hours later, not sure how long, the rumblings woke me up again. I drank some more water (hello, confused), but I couldn’t settle down to sleep. Then the PAIN started. Then I started to feel queasy??..….let’s just say I made it to the little safe room of the house where I began to expel the contents of my stomach through the entry and exit points of my digestive system. Several minutes later, spent, I crawled back to bed where I spent all of Wednesday, waking up on Thursday quite bewildered. What. Just. HAPPENED? It had to be something I ate? On a TUESDAY? I didn’t go anywhere, I didn’t eat anything diffe……THE CHICKEN. I bought chicken on Sunday 20th from a mega Korean grocery store in East Plano, close to me. I’d never shopped there but it was en-route home, what could go wrong I thought. That was the ONLY addition to the Monday leftovers I ate on Tuesday!

It was not till Saturday that I started to feel like myself, eating, walking. I kept myself hydrated in the ensuing days….water, apple cider vinegar, more water, I think I ate half my breakfast portion in the 4 days.

I whatsapped my neighbour and told her what happened, she was the one who told me where the store was. Imagine my SURPRISE when she said….she threw away chicken she bought there and also put the trash can/bin outside her house as it smelt so bad! WHAAAAT?

Then a friend who lives locally told me he got fish from the same store over Thanksgiving in November and threw it away after unwrapping it as it smelt so bad. Ok…….?? Seems like a lot of dodging dodgy food bullets!! Sunday was such a beautiful day in Dallas, Texas, I went to White Rock Lake and walked for hours….I was definitely back to me, I felt recharged! 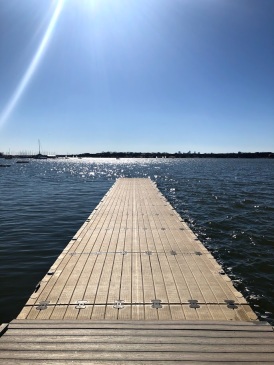 I was just glad to be better. I wanted to put it all behind me. A friend had said I should consider reporting the store to the “authorities”. It sounded like a chore. I felt like a whistleblower or something. I actually felt bad thinking they could be penalized. I don’t like conflict.

But then again…..what if a YOUNG CHILD eats poultry, fish, meat…or other foods purchased from that store? What if I fed the 4 pieces of chicken I cooked to GUESTS? What if A FAMILY had eaten a meal with items from that store??!! What of all the MONEY we paid for items that we had to throw away? They are clearly not thinking about their customers or our wellbeing! And you’re feeling “bad”…for…for what? Seriously Titi?!!

So today, Tuesday, I did just that. Hours away from when I first felt those painful stomach cramps signalling food poisoning…..I went to the United States Department of Agriculture, Food Safety and Inspection Service website and used the convenient and easy “Report a Problem with Food” form and did just that. I REPORTED THE STORE. What a remarkable Tuesday!

Enough. Don’t just take it lying down people (forgive the pun!). Don’t always look the other way, stay silent, appease to appeal. Stand up for what is right. I used to be quick with the pen on poor customer service or lack thereof. I remember I would even offer to write to companies that had wronged my friends! Life can get in the way….we all want the easy life. Sometimes you have to fight for what you want. No more food wars in my tummy, thank you very much.

Cover photo credit, Pixabay free image, all others, mine.